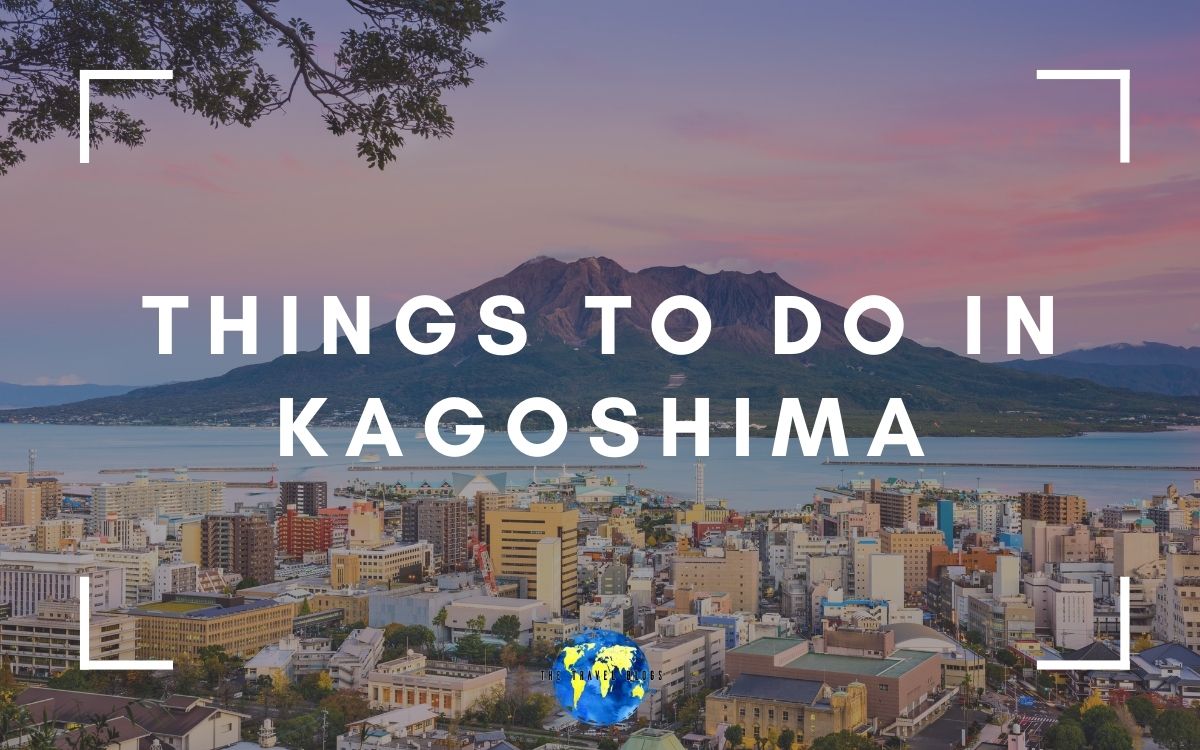 In this article, we will look at some of the best things to do in Kagoshima. Japan is a destination unlike any other. With its amazing good, captivating culture and beautiful nature, it is any traveller’s dream.

Most first-timers decide to explore Tokyo or Kyoto, but if you are looking for a more peaceful and laid-back location, discovering Kagoshima is a must. Filled with a myriad of attractions, excellent museums, and great shopping opportunities, it is a city worth visiting. Here is a list of our favourite things to do in Kagoshima.

Top Places to Visit in Kagoshima

Hike around Sakurajima Island and Volcano

Sakurajima peninsula, which used to be an island, has become the symbol of the city and is one of the top things to do in Kagoshima. When the volcano erupted in 1914, it connected with the Osumi Peninsula. Nowadays, Sakurajima is an excellent place to go hiking and get up close and personal with a live volcano.

Sakurajima is also home to a visitor centre and gift shop, onsens, and a wonderful foot bath heated by the volcano. There are also beaches covered in volcanic rock (and a few sandy stretches too).

Useful Tip: Don’t be an idiot like I was, and buy a piece of volcanic rock from the gift shop only to find the nearby beaches covered in it!

The best way to discover the beautiful area is by car. However, if that’s not what you prefer, you may also explore Sakurajima by walking, renting a bike, or hopping on a sightseeing bus that goes around the whole volcano and stops by some of the most impressive sites and attractions such as Akamizu Observatory and Yunohira Observatory.

Hop on a ferry

Although going on a hike will be an experience unlike any other, those who want to discover the Sakurajima Volcano, but don’t want to spend a day walking around, can take a scenic ride by hopping on the local ferry. Simply head to the Kagoshima Harbour and be prepared for gorgeous surroundings.

Most ferries operate every day, and the journey shouldn’t take more than 15 minutes, but it is one of the most remarkable ways of experiencing the volcano and the stunning views Kyushu is known for.

Go on a train ride

Kyushu and its nearby areas are known as being one of the most scenic in all of Japan. That is why taking a train ride should definitely be on your travel itinerary.

With Japan’s most famous railway, Hisatsu Line, you can discover the most beautiful neighbouring parts of the city, such as Hitoyoshi, and Yoshimatsu. Furthermore, trains in Japan are comfortable, therefore you are guaranteed to have a pleasant day trip wherever you choose to go.

Even if you have never been to Japan, you have surely heard of samurai. To learn more about their past, plan a visit to Sengan-en – the former residence of the Shimadzu family, which was built already in 1658. Nowadays, it is a UNESCO World Heritage Site and is definitely an impressive place to see.

What makes Sengan-en so unique is the fact it is also Japan’s oldest remaining stone factory. Most travellers explore the residence to admire its gorgeous gardens and take in the incredible view of Sakurajima.

Stop by the Shiroyama Observatory

Are you looking for the best views of Kagoshima? Then planning a visit to the Shiroyama Observatory should be on your travel bucket list. First, take its walking trail up the top of Mount Shiroyama. Then, walk around the Shiroyama park, which has a historical significance – it was the place where the battle of the Satsuma Rebellion took place more than 130 years ago.

Top Tip: Head to the park before sunrise for an incredible display as the sun comes up behind Sakurajima! Definitely one of the best things to do in Kagoshima!

Get inspired at the Kagoshima City Museum of Art

To get your daily dose of culture, make sure to stop by the small Kagoshima City Museum of Art. There you will find a collection of breathtaking Western-style works by the local artists.

Amongst the stunning artwork, you will also notice paintings by Renoir, Picasso, Monet, and Warhol. Don’t forget to purchase souvenirs to bring back home to your loved ones – in the museum, there are plenty to choose from.

Have a day at the Lake Ikeda

There is nothing better than spending a day in nature. When sightseeing in Kagoshima, remember to include Lake Ikeda in your plans. Set in the southern part of the city, the most prominent volcanic lake on Kyushu Island will definitely steal your heart.

The magnificent yellow flower field alongside the water makes it even more special. Take in all the beauty and let all of your worries drift away.

If you have come as far as Kagoshima, then I would highly recommend going a little farther south and heading to the beautiful island of Yakushima. This small, densely forested and mountainous island is a playground for nature lovers.

Yakushima is home to stunning beaches where loggerhead turtles come and lay their eggs every spring (so please pay attention to the signs and don’t disturb them). There are many hiking trails in the interior ranging from day hikes to multi-day hikes.

Yakushima is most famous for its Yaku Sugi trees and indeed is the site of the world’s oldest tree, Jomon Sugi, at over 7,000 years old.

There are daily sailings between Kagoshima and the ports of Anbo and Miyanoura on Yakushima. The Hydrofoil takes around 4 hours and there is also a car ferry service and even an overnight container ship that you take (highly recommended for the truly adventurous traveller). See my post about the Yakushima ferry services here.

Two of the most famous Kagoshima foods are Kurobuta (black pork) and satsuma oranges, which can be found growing across the region.

Opened already in 2012, it has become a loved destination for both tourists and locals. Simply choose a booth that catches your eye and take your taste buds on an exciting adventure.

To those who are not from Japan, black pork might seem strange and unusual. But don’t let it scare you! When visiting Kagoshima, not trying the famous meal is a crime. If you have the chance, the best place to taste the black pork is in Aijmori, a well-known Japanese restaurant.

Typically, it is served in the shabu-shabu style, which means the meat is cooked in boiling water. In some restaurants, you will see that also vegetables are added to the mix.

After having a full day of sightseeing, you will surely want to sit down and wind down a bit. The best place to do it is Tenmokan Mukaji, a famous eatery nestled in the Tenmonkan shopping district. What makes the place so special is its shaved ice desserts.

Some people travel from cities hundreds of miles away and stand in long lines just to taste the yummy treat. The dessert typically features Kagoshima condensed milk and colourful fruit on top, making it a sensational adventure for your taste buds.

If you are a fan of vodka, you will surely enjoy Kagoshima’s version of the famous drink – shochu. Made from sweet potatoes, it is loved by both tourists and locals. Usually, the alcohol is consumed by mixing it with hot water.

Although it might seem like an unusual combination, the warm water is used to release deeper flavours. Shochu, sometimes also called imo-jochu, can be found in pubs and cafes all over Kagoshima.

Kagoshima is located on the southern tip of the southern island of Kyushu. It is well connected to major cities across Japan by air, rail and bus.

There are daily buses and trains from Nagasaki, Fukuoka, Aso, Beppu and more.

It is possible to take the Shinkansen from Tokyo to Kagoshima with two transfers at Osaka and Fukuoka.

Kagoshima is a port city with sailings to and from the nearby islands of Nishinoomote (home of the space launch site) and Yakushima. There are even sailings to Okinawa, Japan’s farthest territory. Kagoshima Port and Kagoshima station are within walking distance of each other.

From South Korea you can take the fast hydrofoil ferry from Busan to Fukuoka and then onto Kagoshima!

Central Kagoshima is easily navigable on foot, but there are also trams and buses to reach destinations a little farther afield. Kagoshima Chuo Station is within walking distance of the port and most major attractions in the city.

There is a ferry service between Kagoshima and Sakurajima running hourly each day.

Places to Stay in Kagoshima

A good budget option is the Washington Hotel Plaza which is halfway between the station and the port, and within walking distance of all the major Kagoshima attractions.

Spring temperatures range from about 12 to 20 Celsius with moderate rainfall.

Summers are hot and humid given Kyushu’s temperate humid climate. Temperatures can go up to 35 Celsius and the nights can be hot and sticky.

June to October is the monsoon season, with July and August being the wettest months. August is also the sunniest month.

Autumn, which starts from October is the driest season with temperatures averaging 15 to 20 Celsius.

What is the Best Time to Visit Kagoshima?

If you want to see the cherry blossom, April is the perfect month, however it is possible to see a special early-blooming variety from late January through to April at Senganen.

The sea around Kagoshima is warm enough to swim in summer, but you may have to put up with the frequent downpours.

Autumn (fall) is one of the best times to visit given the lack of rain and still warm temperatures.

Is Kagoshima Safe to Visit?

Japan is an incredibly safe country to visit and Kagoshima is no exception. Violent crime is extremely rare and never usually targeted at tourists. That being said, Kagoshima sits across the bay 8km from the active Sakurajima volcano.

The last major eruption was in 1914, but there are small eruptions almost daily, sending plumes of ash high above the peninsula. A warning system is in place and should a large eruption be imminent, follow local instructions. More info here.

It pays to ensure you have adequate cover for any trip abroad. Given Kagoshima’s proximity to an active volcano, it is doubly worth having cover in case plans are disrupted. World Nomads provide the perfect policy for adventurous travellers. You can get a no-obligation quote here.

Kagoshima is a fantastic destination thanks to its laid-back feeling, beautiful views across the harbour to Sakurajima volcano and thriving food scene. The city makes an excellent jumping-off point for exploring Japan’s lesser-known islands in the Pacific Ocean.

Steve Rohan, originally from England, has travelled extensively across Europe and Asia, mostly by train, and has written about his travels for this blog, The Trip Goes On, as well as self-publishing his first book, Siberian Odyssey.