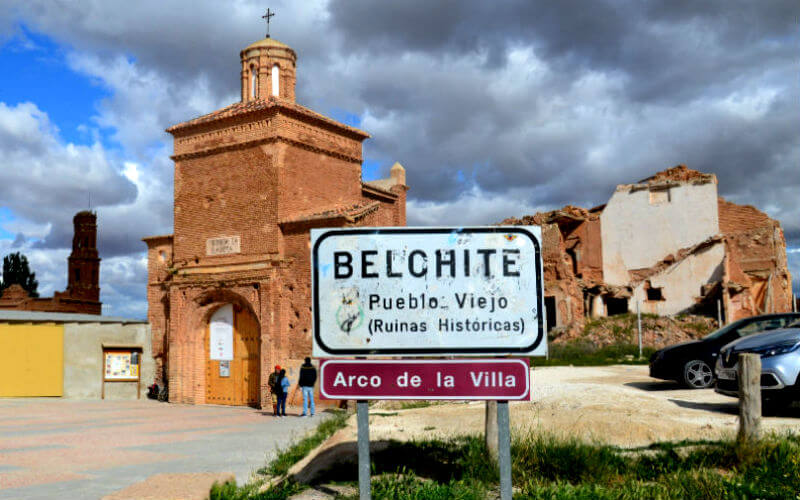 The ghost town of Belchite must be one of the best sites to visit for those who have an interest in the Spanish Civil War, warfare in general, or that period of history. Even if you don’t have an invested interest, as an experience and exposure to the brutalities of real warfare, it is a thought-provoking site to visit.

Belchite was devastated during Spain’s Civil War. When the battle of Belchite was over, rather than rebuild the town, Franco forced the inhabitants to move and start a new village next door. The old town was to be left so that the destroyed buildings can stand as a reminder to the power of Nationalism and his armies.

Until recently, Belchite was open for people to wander freely and explore as they like, but after spates of vandalism, it was decided to restrict access and allow entry with official guided tours.

A bit of history on Bechite

The Spanish Civil War had already been raging for a little over a year when the battle of Belchite took place. On one side you had the Republicans, who were loyal to the Second Spanish Republic and technically in control of Spain, and on the other side, you had the Nationalists, a military uprising controlled by General Franco.

In the late summer of 1937, the war reached Belchite. The heavily fortified settlement was held by the Nationalist army, and while Belcite didn’t offer much strategically, the Republicans saw that taking the town would be a big win in the propaganda war and hopefully relieve pressure on the Republican troops being pushed back on the Northern border of Spain.

On the 24th August 1937, the Republican army laid siege to the town, cutting off water supplies while the community was bombarded by shells from the surrounding hills. The British Airforce supported* the bombing from the air, and a small American brigade supported the ground troops.

Stories were coming out of the town about the number of people that were dying, and as casualties began to stack up at an astonishing rate, there was no time for burial. Due to the intense summer heat, the bodies started to decompose quickly so the town defenders dug a giant mass grave where they would burn bodies, up to 80 at a time.

Despite the lack of food, water, and the terrible conditions, the Nationalist forces held out as long as they could until the Republicans finally stormed the town. The fighting was fierce and ruthless with street-to-street and house-to-house combat until the town eventually fell on the 7th September 1937.

While the number of deaths wasn’t recorded officially, the estimates have it somewhere between 3000 – 5000. Considering the population of the town was around 3000 at the time, that’s a significant number.

While the Republicans won the battle, in time, they lost the war, and Belchite reconquered by Franco’s forces in 1938.

Rather than rebuild the town, Franco ordered that the now-razed buildings and streets remain untouched as a monument of the war and a reminder of the “irresistibility of the Nationalist forces.”

A new Belchite village was built a couple of hundred meters away from the ruins of the old.

We took the afternoon tour having turned up to buy the morning ticket only to discover it surprisingly, was sold out. We weren’t visiting at peak times, we just assumed we could turn up and go.

This left us with a few hours to kill in new Belchite, they were a long few hours. Despite the historic site next door, there is very little in new Belchite to hold your interest. We purchased a couple of bocadillos (big sandwiches) at a local bar and then found a quiet spot to eat them.

The spot we found was down a quiet country road on the edge of town, it offered a great view over the expansive nothing that surrounds the village. It’s a rolling, arid landscape that shows signs of years of erosion and not much else. While it was strangely pretty in its own right, it wouldn’t go down as one of my best lunchtime views.

After our lunch we found another bar to sit in and have a coffee before it was finally time for us to head up to the old town and start our tour.

Large wooden gates mark the entrance to the old town with a sculpture in the shape of the words “Memoria y Paz,” Memory and Peace. A man stood in historical costume posed for photos with visitors as they waited for the tour guide to arrive.

I was surprised at the size of our group, there were around 30 of us that took the tour.

As the guide opened the doors, she started with some basic safety notes and upon realizing I was English, produced a small MP3 player that plays a translated recording of the tour.

After some scene-setting and photo posing with the canon that sits, ominously pointing up the main street, we were underway. The Spanish seemed engaged in the stories the guide was relaying, her grandparents actually lived in the old town and managed to escape.

Being on the translated version was a little strange, a lot of what I was listening to actually beared no resemblance to what was being said by the guide, moving at very different speeds, the fact it was in a thick English west country accent, gave it a surreal twist. But I didn’t mind, it left me free to wander and take photos.

The tour led up the main street past the remains of builds that sat mostly untouched since the reconquest of Belchite. You could see through the houses into what once were stairwells and bathrooms, the walls still tiled.

As we made our way to the old town square, we came across the Cross of the Fallen. The large iron monument was forged by Republican prisoners in the concentration camp built in Belchite after the war. It was the same prisoners who also began the construction of the new town.

The cross now sits on the site where the pit that hundreds of those killed on both sides during the battle were incinerated.

My personal, digital guide spoke of the battle, how it raged, it talked about the burning of bodies and what it was like to live under a siege as we looked up at the clock tower with its large hole where the clock used to sit.

At the end of the main street is the Iglesia de San Martín de Tours, the steeple defiantly standing despite the multitude of scars that blanket the bricks. On the doors some haunting words are painted, “Pueblo viejo de Belchite ya note rondan zagales ya no seoiran Las jotas que cantaban nuestro padres.” It translates to “Old village of Belchite, young men won’t come here any more you won’t here las jotas that our parents used to sing.” Las jotas is a traditional type of Spanish song and dance from Zaragoza.

A wander inside will one of the small side chapels will show a hole in one of the roofs where a shell came straight through.

As we turned and headed back to the entrance of the tour, we took a small side street where another tower defies all logic by still standing, an unexploded shell still protrudes from one of the walls.

In total, the tour lasted for an hour and a half and is an excellent introduction to the Spanish Civil War, one that is often lost in the history books of other countries as it took place just as World War Two was beginning.

As the tour wound down and we headed out of the old town, there was one last stop. Our guide pointed out the house that her family used to live in. While there wasn’t much left, the moment was undoubtedly a sobering dose of reality to an already shocking look at the past.

I’d recommend booking a day or two in advance to avoid having to spend the afternoon staring out the plains of nothingness while enjoying a hastily made bocadillo.

The tours are at 12 pm and 4 pm between Monday to Thursday, and at 12pm, 4pm and 6pm from Friday to Sunday.

On Friday and Saturday, there are also night tours of Belchite at 10 pm. These focus more on the ghost stories and the macabre history of Belchite rather than the war and battle itself. Certainly one for the brave.

Tickets to the guided tours can be bought from Belchite tourist information until 30 min before the start of the tour or online.

For more information, you can visit the Belchite tourism website.

Price for a tour of Belchite

How to get to Belchite

Belchite is located around 40 km southeast of Zaragoza, and of course, the easiest way to get there is by car. It should take a little over 30 minutes to get there.

If you don’t have your own vehicle, car rental in Spain is pretty cheap, and you can then use your time more wisely and include a stop in some of the prettier villages in Aragon.

Alternatively, there is the Zaragoza – Belchite bus http://www.hife.es/en-GB. If you wanted to achieve the Belchite visit and get back again in one day, you would have to get the first bus out that leaves at 8:45 am and be on the last one back at 3:45 pm. As you will probably work out, this means your only tour option is the 12 pm tour.

The bus costs €5 each way, but as always, if you’re buying online, there is a small service fee and tax, which takes it to €13 return.

Just throwing in here, if there are two of you going, at €26, you are already very close to the price of car hire for one day.

If you were staying there overnight, the bus between Belchite and Zaragoza runs four times per day, leaving from the Central bus station.

Where to stay in Belchite

There is actually only one option in the village, but fortunately, it’s a pretty nice place and offers excellent value. If you wanted to stay overnight, the Hotel Oleum is probably a great choice.

Places to stay in Zaragoza

Most people visiting Belchite will be doing so from the regions capital city Zaragoza, where there are loads of great places to stay. When we visited, we were in the Hotel Tibur.

I booked it mainly on location, and it lived up to the reviews that all said pretty much the same thing. Great location but nothing special about the hotel itself.

Would I recommend it? Not really, the redeeming feature was the location with a view over the main square, so if that is important to you and the other options are way more expensive or booked, then yes, go for the Hotel Tibur; otherwise, you can probably find better value elsewhere.

5 thoughts on “A Belchite Tour: The Ghost Town of the Spanish Civil War”