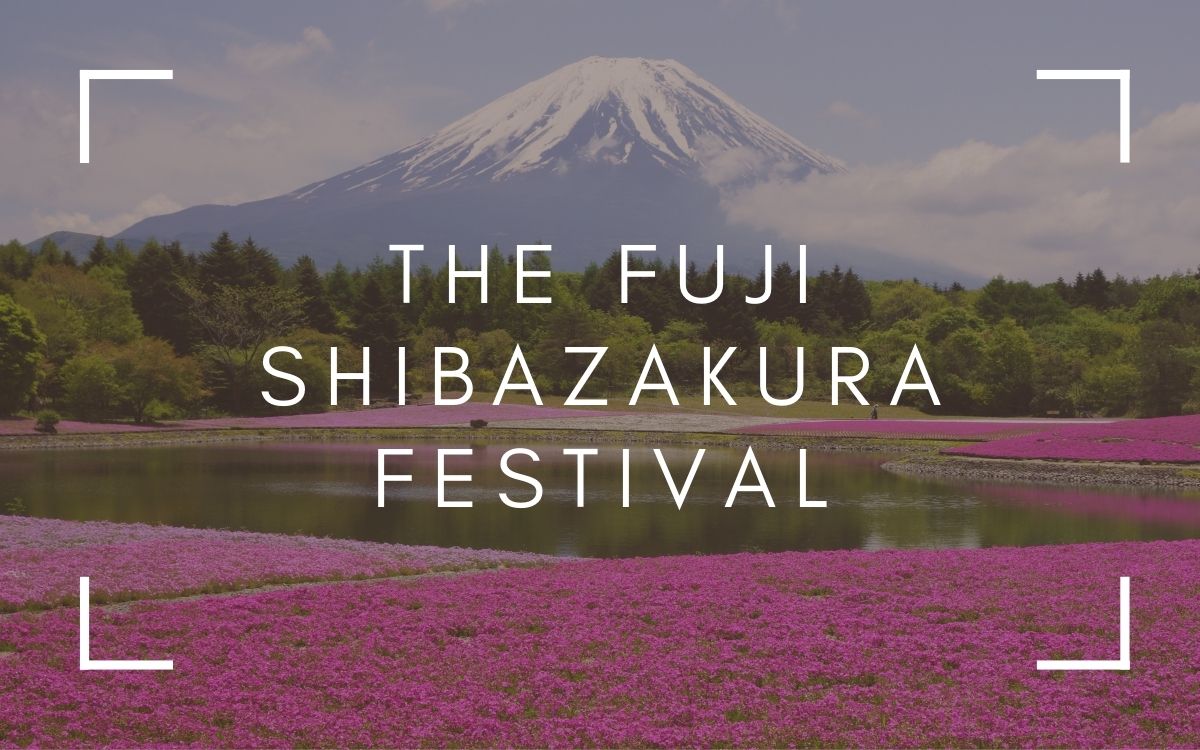 From April to May each year in Fujikawaguchiko in Japan, the Fuji Shibazakura Festival – 富士 芝 桜 まつり – is held. In the middle of May, I made my way from Tokyo to Kawaguchiko to enjoy this beautiful flower event with nearly a million bright pink moss phlox on display.

The festival site is by Lake Motosuko, one of the lakes that combine to create the area known as the Fuji Five Lakes and makes a great day trip if you are looking to include one in your Tokyo itinerary.

In this post, I put together all the information I collected on my visit as well as how to get there so you can enjoy the flower festival and all its beauty in the future.

Note – Please know, some of the external links in this page are affiliate links, this means that if you purchase after following one, I make a small commission from the sale at no additional cost to yourself.

What is the Fuji Shibazakura festival?

Fuji Shibazakura Festival is an annual flower festival, held close to Lake Motosuko, and the most popular place to enjoy almost endless fields of shibazakura, a pink flower, also called moss phlox. with the stunning Mount Fuji as the backdrop.

The Moss phlox, better known by the name lawn cherry in Japan, is a small groundcover plant that is actually native to the United States.

At the festival, there are more than 800 000 Shibazakura flowers for you to admire, more than anywhere else around Tokyo. Especially impressive are the flowers here because of the unique views of Mt Fuji you can enjoy at the same time.

The festival is usually held in the late spring, from mid April through early June with the best time to see the thousands of flowers usually falling into the first three weeks of May.

How do you get to Fuji Shibazakura festival?

I made my day trip to Kawaguchiko by rental car. It is the most flexible and also fastest way to get around and make the most of your time while you are in the area.

You can check prices and rent your car conveniently via rentalcars.com

If you want to drive as a tourist in Japan, you need an international driver’s license which you have to get before you leave your country.

I would also like to remind you that the Japanese drive on the left side of the road and usually use automatic shift geared cars.

The bus from Shinjuku will cost you 1750 Yen (17 USD) one way, and the connection to the festival from Kawaguchiko Station, called the Shibazakura Liner, an additional 2000 Yen (20 USD). The connection departs every 30 minutes and the price is a round trip that will take you back to Kawaguchiko Station and covers the 600 Yen admission to the Fuji Shibazakura Festival.

Be advised that both the highway bus and the Shibazakura Liner are very popular and you should make sure to reserve your tickets between Shinjuku and Kawaguchiko in advance.

You can book your bus online.

Your last option to experience the Fuji Shibazakura Festival and also other activities in the region is to participate in a Shibazakura tour from Tokyo. The Mt Fuji & ShibaSakura Festival with Hotel Pick Up includes the transfer by bus from Tokyo and back with an English-speaking driver or tour attendant and the admission fee to the festival.

You will also visit the Komitake Shrine and the opportunity to take a few more stunning pictures of Mt Fuji at Mount Fuji 5th Station.

When to visit the Fuji Shibazakura Festival

The flower festival takes place from mid April to late May or early June. The actual dates will vary slightly from year to year, so be sure to check the exact time of the festival if you are planning your trip to Japan around it.

When I visiting in late May, many of the Shibazakura and other flowers in the park were already wittered. I would imagine going even later than that won’t make for a better experience.

So I guess the best time to visit would be around the end of April or the beginning of May, but be warned, a visit during the Gold Week holiday (usually starting on the 29th of April) is not recommended because it will get super crowded with Japanese visitors.

A visit on the weekend, especially during the most beautiful time in April also attracts many visitors and so, in general, a visit on a weekday, and especially in the morning is your best option to avoid the crowds.

My Experience of the Fuji Shibazakura Flower Festival

I made my way by rental car from Tokyo to Kawaguchiko in Yamanashi Prefecture on a Saturday morning. The ride is supposed to take about 2 hours, because of a little bit of weekend traffic and a bathroom break I needed about 2 and a half.

If you travel to the festival by car, it can be quite crowded, especially on the weekend, but after about 10 minutes of queuing in front of the parking lot entrance, I finally got in and found a good parking space not too far from the exit.

If you want to travel by car type in Fuji Motosuko Resort or Motosu Highland and you will get to the right location.

Pro tip: Try to park at the first parking lot, the second is really far away from the entrance to the park. The parking fee is 500 yen.

So, I got out of the car, equipped with a sunhat, sunglasses and my camera and made my way to the entrance. There are some booths selling food and local products as souvenirs, but for the moment I ignored them. Souvenirs are for when you leave a place, am I right.

The park where the Fuji Shibazakura Festival is held every year is much smaller than I thought, and I was unimpressed at first glance. Many of the flowers were already withered, and there wasn’t much pink (or even green) left on the ground.

But while the entrance area isn’t too impressive the view of the observation deck with the little flower Fujisan in the foreground and the real Mount Fuji as the backdrop is where the breathtaking photos can be taken.

After a couple of snapshots from different angles, I descended the observation area and continued on my way around the park.

Strolling through the Shibazakura Garden

From every part of the park, Mt Fuji is an amazing sight and the pink moss in the foreground even if they aren’t as beautiful as they could be because I visited so late in the season, made for a pretty picture opportunity. And I took countless pictures while strolling through the Mt Fuji flower festival.

About halfway through the park, there is a little café called Fujiyama, selling Mt Fuji and Sakura themed sweets, and even some big stalls selling Japanese festival food and some lovely udon noodles.

There were many people (mainly Chinese tourists) having their meal sitting around on the many picnic benches or on the floor and enjoying the fantastic view.

Nearing the end of the route of the park you come to a pond which also looks very nice in pictures, especially together with the flowers and Fujisan.

All in all, I spent a little over an hour at the festival. If you decide to eat lunch, there and walk slower to take some more pictures, it might take a bit longer than that.

On the way out I paid the 500 Yen (5 USD) for parking, had a look at the official souvenir shops in front of the exit/entrance (we didn’t buy anything), and made my way to the next destination of the day: Lunch!

During my visit, I was in luck, and the weather was fantastic. There were no clouds in the sky, it was sunny, it was warm, but not too warm. Being able to see Mount Fuji really depends on luck and the weather. But if you want a better chance to see it try to visit very early in the morning.

According to other people, the best time to take pictures is in the afternoon. Don’t expect to see the mountain on a rainy day, and even on a sunny day, Mt Fuji likes to hide behind clouds at around noon.

Other things to do in the area

I have a couple of other posts you may like to read. You could visit other famous Mount Fuji viewing spots in the Fuji Five Lakes area or also check out this post about what to do in Kawaguchiko for some more great ideas.

I had a great time at the Fuji Shibazakura Festival and the answer is yes, it is certainly worth visiting. Even though many of the flowers weren’t in full blossom anymore, it was a stunning sight. If you come on the right day at the right time, your experience will be even more magical.

Let’s just hope that the weather is your friend and the sun is shining down on you during your visit so you will have a fantastic view of Mount Fuji from the Fuji Shibazakura Festival and all the other destinations you visit during your day trip. 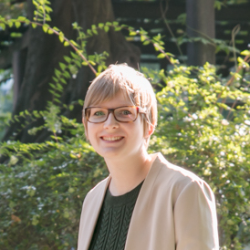 Lena
Lena Yamaguchi fell in love with Japan as a teenager and had the chance to work and live in Tokyo for 3 years after graduating from university in Germany. See took the time to explore Tokyo and its surrounding areas in depth. Now Lena lives in Nagoya, where she has made it her mission to spread the word that Nagoya is not boring.

Latest posts by Lena (see all)