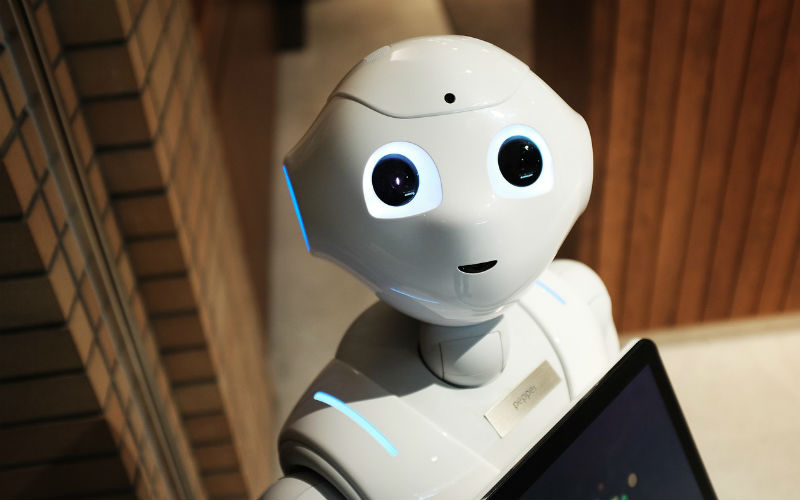 robots are starting to impact our lives. From cleaning your floor to cutting your lawn, keeping a swimming pool sparkling and even glass, you can now buy window cleaning robots. These little technological wonders are invading our homes and making mundane chores easier than ever. But are robots in the hospitality industry making an impact yet?

As well as The Travel Blogs, I also have a second website, Little Robot Shop, so I thought it would be fun to do a crossover post that blends the two and take a look at how robots are invading the travel and hospitality industry.

How are robots being applied in the travel industry?

Since the travel industry is dynamic, integrating robotics is an ever-growing innovation that is continually being refined. As more travel organizations are starting to see the benefits of robotics, they are becoming a more common sight.

It is Asia, in particular, Japan and China, that are leading in the adoption of robotic travel services, many other travel and hotel brands are incorporating travel robots to give their clients a rewarding experience.

In fact, robots are becoming a more common sight in many hotel roles, including the delivery of room services, entertainment, cleaning, and customer care. Some of the latest innovations are even being used for security checks and cooking.

While in the past, most robots were made to resemble animals and machines, more fashionable travel robotics mimicking human behaviors are being innovated. Let’s take a closer look at a few examples of travel sectors and companies that have embraced robotics.

Robots in the hospitality industry

Several leading hotel chains serve as excellent examples of what robots are capable of. They have adopted robotics in their day-to-day activities, including cleaning and room service delivery.

The Henn-na Hotel Group in Japan owns a chain of hotels that are staffed by robots. In their hotels, you will be welcomed and checked in by, rather oddly (but pretty cool), a robot dinosaur. There are also robots to carry luggage and take guests to their rooms.

However, recently the management of the hotel chain fired the majority of their robots as the experiment proved that there was actually no saving and have once again hired humans. I guess the technology still isn’t good enough quite yet.

Another example of robots in hotels is the Hilton Hotel concierge in McLean, Virginia. Known as Connie, this robot will answer your questions regarding the hotel amenities, check-out time, nearby attractions, eateries, and areas of interest.

In Intercontinental Hotel based in Crowne Plaza, Silicon Valley you will find Dash, a machine robot doing what it does best navigating, the hotel corridors to deliver items such as towels and toiletries to guests’ rooms.

Aloft Cupertino and Residence Inn by Marriott are other hotels where you will find robots being used in the hospitality industry.

But it’s not just hotels, restaurants are starting to see the benefits of robots too.

In China, many restaurants have deployed robotic waiters and waitresses. If you visit most of the He Restaurants in at least 13 Chinese cities, your food will probably be delivered to the table by a robot.

However, my favorite example of how robots are having a hugely positive impact in the hospitality industry is in Cafe Dawn, Tokyo. Here the cafe deploys robots that are remotely run by paralyzed staff.

Depending on the severity of paralysis, just eye movement can control these robots.

This is the perfect example of how humans can work with robotics to give a new lease of life to people in unfortunate circumstances while offering a truly unique dining experience to their customer.

But it’s not just the waiting that robots are meddling with. Boston robotic technology has been taken a notch higher by replacing even the chef! Once you make your order, a Spyce’s robotic kitchen will prepare your meal in less than three minutes and serve you.

People rushing everywhere as they run to try and catch their fight, especially when combined with jetlag on a layover means airports can be confusing places. It is easy to get lost, delayed, or even miss your flight.

That is why a few airport operators are testing and deploying robots to reduce queuing and make the airport experience smooth and enjoyable for passengers.

Recently, Geneva Airport, San Jose International Airport, and Schiphol Airport have all been experimenting with robotics. In these trial instances, they used robots to entertain, help in check-in, translate, and carry luggage and guide passengers.

Additionally, a fleet of robots is being tested in airport security departments and already in use in La Guardia Airport, New York. With facial recognition cameras, the robots can move around freely while police officers in the control room can monitor and easily keep an eye out for any suspicious activity.

As with airports, train stations have realized the massive potential with robots and continue to form collaborative efforts with innovators. Case in point is pepper robot which is deployed by Eurostar Company at St. Pancras International Station to give information about train schedules, ticket prices and nearby amenities in multiple languages.

Once again, though, for the most innovative use of this technology, we have to look to Japan. To prepare for the 2020 Tokyo Olympic and Paralympics Games, Japan is focusing on improving its transport, communication, and accommodation sectors.

To help ease the transit of participants and fans from all over the world, Japan is introducing Arisa, a six-foot robot, created by the Tokyo Metropolitan Government. Arisa will give subway travelers directions in Japanese, Chinese, English, and Korean, and even show them the way to the restrooms.

Besides Arisa, Japan has also been testing robot station security guards to boost security. Named Perseusbot, they have set this security robot to patrol the rail stations and help staff in detecting suspicious baggage and individuals.

This is something I would certainly expect to see more of in the not too distant future. While we are still a long way away from a full-on Robocop with AI decisiveness, robots can still monitor while being overlooked but a human touch in a control room.

Another cruise company, Costa Cruises, has a humanoid robot as part of its staff. Pepper, an interactive robot on Costa Diadema can entertain and provide information regarding, onboard amenities and ship itinerary.

Robots you can travel with

But what about travelers, how can we enjoy robots on the road? While there is no doubt, the majority of the technological breakthroughs have been aimed at large companies with the kind of budgets that can afford advanced robotics, if you’re a fan of the future, there are a few ways you can enjoy this trend.

Unlike robotic luggage porters, that transport baggage robotic suitcases are self-driving and are designed in such a way that they follow their owners.

The self-driving suitcases by Zzpro are linked to and controlled by a smartphone via Bluetooth. This smart luggage has a removable lithium battery and a built-in scale.

What’s more, some sit on and ride option which means for the lazy traveler, you can actually ride your suitcase. I witnessed this myself just earlier this year while in Newark Airport, sorry for the poor video quality, but I wanted to include it.

Cleaning robots that travel with you

As I alluded to earlier, robots clean your home, but that technology will soon be available to put in your luggage and take on the road with you.

Now, of course, you’re not going to take a vacuum with you, however, have you ever get grossed out thinking about hotel bed sheets and what a life they have? Well, this little bacteria-killing bot may be just what you are looking for.

CleanseBot is a portable bacteria-killing robot that gets under the sheets and uses UV lights to disinfect and sterilize surfaces. Weighing only 220 grams, this smart travel robot will is an excellent bit of tech for any germ-o-phobes that you know!

Given the amount of human control required with drones, I guess this is a bit of a stretch, but more people than ever are currently traveling with drones. As technology advances, the little flying photo makers are cheaper than ever and packing more technology and smart modes than ever before.

GPS control, dronies, auto-orbit, return to home on auto-pilot, it’s not that long ago that these features were restricted to the most expensive drones, however, they are now coming basic features.

Limitations of robots in the hospitality industry

Like with any disruptive technology, adoption of robotics in the travel industry has raised several questions, criticism and created a wave of fear.

While some people find robotics fascinating, others anticipate that robotics will water down the authentic experience that comes with hospitality should travel industry embrace entirely operated robotic services.

To those that are opposed to robotics, they feel that human connection is paramount to any travel experience. While robots offer certain positive benefits within the hospitality industry, there are few limitations that cannot be ignored.

So what do you think?

It is predicted in the coming years’ robots will become more and more prevalent in the travel industry, but as the Henn-na hotel chain has proved, they are not quite good enough yet.

It is clear that travelers will come into contact with more robots in room service delivery, providing directions, and handling check-ins and check-outs and especially in high-security areas.

But are we ready to trust them?

At the moment, it seems while they make a fun attraction, interacting with them can sometimes be a frustrating practice and most travelers prefer having actual human staff available rather than robotic staff working on their own. The quality of AI and trust just isn’t there yet.

It is likely with the advancement of technology and continual investment in and improvement of artificial intelligence, there will be a rise in the global acceptance of robots. While we’re not quite at i-Robot level yet, it seems we are on the way.

Let’s just hope the future is more Jetsons than Terminator.

How about you, ould you be happy to have a robot prepare and serve your dinner? Or do you crave the human touch?