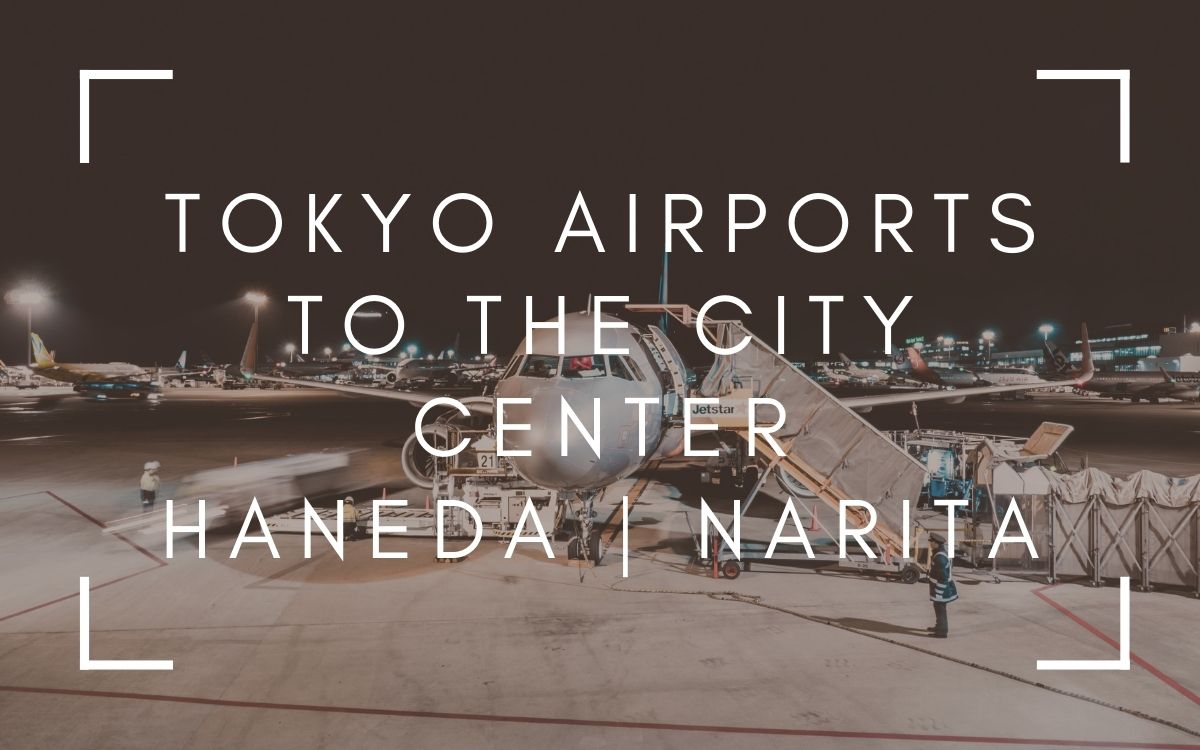 The excitement never really fades away. Even the most seasoned travelers will attest to the strange mix of fear and excitement that comes with attempting a task as easy as going from Tokyo Airport to City Center when you’re in Tokyo, Japan, for the first time.

When arriving in any new country for the first time, so many questions plague the mind at that point. Which airport gets me closest to the City Center? Is there a public transport alternative? Or is there a fixed cost I should be aware of? When it comes down to it, more than getting to our destination safely and comfortably, we want to ensure that we’ve not unwittingly spent a fortune for what’s really a straightforward trip.

They are all reasonable concerns, and that’s why this piece exists. This written guide explores your best ways to get from Tokyo’s airports to the city. So, Let’s begin!

Please note: some of the links in this post are affiliate links. This means if you make a purchase after following it, I make a small commission at zero cost to yourself. I only recommend products and services I trust. Also, all currency conversions are based on the time of writing, so please be aware there will be fluctuations.

Which airport in Tokyo is the best to arrive at?

Narita Airport in Tokyo is probably the most popular air hub in all of Japan, but don’t join the unending list of people who just assume that Narita is the nearest airport to Tokyo City Center. The 70-kilometer distance from Narita’s Chiba Prefecture to Tokyo’s downtown areas can be easily offset by using Haneda Airport instead.

While there are some cheap transportation options from Narita, early-morning and late-night flights will leave you with the more expensive ones. Haneda Airport is just 15km away from the City Center, so your transport options are more, and you’re obviously saving a great deal of time and money with the 55 km head start.

Since Central Tokyo acts as a main player in Japan’s rail transportation hub with more than 3,000 trains passing through daily, it should come as no surprise that the two best transportation options from Haneda Airport, which is just some ways off the city’s center, are railway options.

The Tokyo Monorail and Keikyuu train line are the cheapest options you should consider. Although the Tokyo Monorail offers more comfort and availability for a slightly costlier price, you won’t be the first to opt for the cheaper Keikyuu line. If money’s not your problem or you’re stacked with luggage, then there are taxis and buses that will tick your boxes.

This train doesn’t actually take you straight to the center of Tokyo. But you shouldn’t be scared of the fact that you’ll need to make a stop at Hamamatsucho to get on the Central Japan Rail (JR) Yamanote Line and make another stop at any of the livelier Shinjuku, Shibuya, Shinagawa, or even the famous Tokyo Station before you take a subway to your destination.

The trip will be over before you’re done reading the previous sentence since the journey is a lot more seamless than it looks on paper.

The Tokyo Monorail stops first at the International Terminal before moving on to the 1st and 2nd Terminals frequently, so make sure you disembark at the right terminal. The average waiting time for the monorail is 5 minutes.

The exciting monorail trip to Hamamatsucho will be over in 13 minutes, tops, and the entire journey costs just ¥490 yen ($4.75). Of course, the drawback with trains is the difficulty in navigating heavy luggage, but there are a few ways to arrange a transfer of your luggage to the hotel from the airport.

Tip: Suica/Pasmo IC cards work for all train lines, and there are discounts for you to enjoy compared to the unpleasant paper tickets.

The less impressive Keikyu line can also take you on the JR Yamanote Line via Shinagawa towards Shinjuku, Shibuya, and Tokyo Stations at just ¥410 ($4). The train tickets are available in automatic ticket machines and ticket counters in the F2 lobby around the baggage claim area.

The average waiting time for the Keikyu line is 12 minutes. Once the train stops at the terminal, you can choose to either head northeast towards Shinagawa or southwest to Yokohama. Yokohama is 25-30 minutes away, so it costs 40 yen more. Also, using the Keikyu line means you can experience the Haneda Airport Express, which goes into the Asakusa Subway Line after getting to Shinagawa.

Despite its classy name, the limousine bus is just a coach bus that’s pretty much the only option for people with lots of baggage, or kids. The bus goes directly to the most popular train stations and hotels in Tokyo’s central areas within an average of 30 minutes.

The limousine bus fares are usually between ¥700 to ¥1,250 ($6.75 – $12), one way, with the prices increasing from Suitengumae Station, Asakusa, Tokyo Station, and Shibuya towards Roppongi and Shinjuku. On the plus side, kids can get aboard the bus for half the price. It’s wise to book the bus tickets before you fly so that you have a seamless transfer as you land in Haneda.

Word of Caution: If your flight lands beyond midnight and you’re planning to go ahead with the travel, be prepared to pay twice the regular fees.

A private transfer will almost always be the most expensive option, but also the easiest. Someone will meet you at the arrival gate, help you with your luggage, and get you straight to your hotel. Is it worth it? If your budget stretches to it, it usually is for the peace of mind it offers.

Check out the prices of airport transfers here.

The most popular airport in Tokyo is also the farthest one from Tokyo’s City Center, with a distance of 60 km (37 miles) as the crow flies between the two locations. Unlike Haneda Airport, Narita Airport is the poster gateway to Japan from most international communities and is blessed with state-of-the-art facilities to display that class.

One of those first-rate services is the Japan Rail Pass, which enables travelers to ride the JR Sobu Line and Narita Express (N’Ex) from Narita to Tokyo at no cost! Ordinarily, using the N’Ex will cost you ¥3,000 ($29) since it rides on the JR Yamanote line across Shinagawa and Shinjuku. Also, there are some other insane options you shouldn’t really consider and some sensible options like the Kensei Skyliner Train that should always factor in your thoughts. They are:

The Over-the-Top Option – Board a Chopper

If your biggest problem is how to spend your bathtub of money, then you can rest assured that you can charter a helicopter. Prices range from ¥29,800 to ¥49,800 ($288 – $480) for the 18-minute flight, one way, and is definitely the fastest way to get from Narita to Tokyo city center.

It should come as no surprise that airport taxi drivers are only willing to travel the 70 km distance from Narita to Tokyo for at least ¥21,000 ($200). The trip takes an average of 80 minutes, depending on the traffic situation that day.

There’s also the option of securing transfer services like MK Taxi and Kiwitaxi online beforehand, but through Get Your Guide you can also book shared taxis from $59 that run all day. If you’re on those late-night flights and early flights, you’ll need to keep this option in mind.

Instead of paying the ¥3,000 ($29) fee for the JR Narita Express (N’Ex) for the 57-minute journey from Narita Airport to Tokyo Station, you can make use of your JR Rail Pass to get to town for free. Of course, this relies on you having a JR Pass, which is a great investment on any trip to Japan, but is certainly the best way to do it if you have the ability.

Don’t forget that seats in the N’Ex are available only on a reservation basis, so be sure to check the seats out at the JR counter at the airport terminal area. Otherwise, you can use the JR Sobu line, which takes 30 minutes longer, but is usually cheaper at around ¥1,320 ($12.75).

Want to travel to Tokyo in 35-45 minutes with a budget size of ¥2,470 ($24) without much hassle? Then the Keisei Skyliner Train was built just for you. The express Train runs freely between Narita airport and Ueno Station in Central Tokyo where you can connect with important lines such as the JR Yamanote Line, JR Keihin Tohoku Line, as well as JR Joban Line. There are some cheaper, but slower, options you can use to travel the same distance.

You can book your ticket in advance here.

As with the other train options, the signs leading you to the trains are very obvious in the arrival hall. Being a private line, though, the Keisei Skyliner does not offer free transfer for JR Pass holders even though the JR and Keisei ticket windows are side-by-side. You can also book the train seat using Voyagin online.

There’s no other option in this list that costs less than a thousand yen, except you’re using the JR Rail Pass, of course – nothing’s cheaper than free, after all.

The bus leaves every 20 minutes from the Narita terminal, so there’s no need to book a seat beforehand, except you just want the journey to be more fluid. You have to know, though, that early morning and late-night services (after 9 PM and before 6 AM) cost double the usual amount.

How far is Haneda Airport to Tokyo City Center?

What’s the distance from Narita Airport to Tokyo City Center?

The Narita International Airport is 70 km (43.490 miles) away from the City Center. You’ll see many exciting sights and meet friendly people along the way, but watch your luggage with care if you’re using public transport.

What’s the cheapest way to get to Tokyo City Center from the airport?

If you can lay your hands on a JR Pass, then you’ll be able to get to Central Tokyo for free using any of the non-private trains on the JR Yamanote line.

Which is the best airport in Tokyo to fly into?

Most international flights don’t get the choice since Narita is the most popular airport in all of Japan with Haneda being used for shorter distances and domestic flights. However, if you had the opportunity to choose between Tokyo’s two airports – Haneda and Narita Airports – then Haneda should be the obvious choice for its proximity.

Why are taxis so expensive?

The only transfer service that’ll take you directly to your hotel without making any stops from the airport are taxis. They also help a lot when you carry heavy luggage.

Is there any disadvantage of using a train?

Trains are cheap and accessible options from both airports, but they’re not great for travelers with a lot of bags or heavy stuff. They also do not run late at night, which will leave you at the mercy of other transport systems if you come too late and can’t loiter around the waiting area for the morning trains.

If you see the option of traveling to Tokyo via the Narita and Haneda Airports, don’t hesitate to choose Haneda since it’s closer and that can mean the world when you’re on a late-night flight. When you get to Haneda Airport, you might be tempted to use the JR Pass for the short trip to Central Tokyo, don’t. Save the pass for longer trips along the countryside you might want to experience later.

On the other hand, if you’re landing in Narita Airport, go for the JR Pass. Unless, of course, you fancy riding the helicopter for ¥49,800. Then have fun!