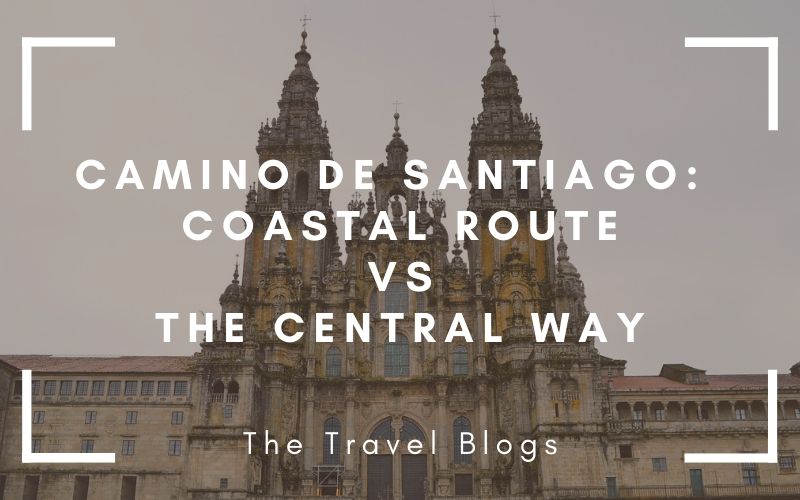 If you are exploring the option of starting your journey in Portugal, The Camino de Santiago Portuguese Coastal Route may be the best route for you. Don’t let the name mislead you—a great portion of the trail runs inland. But it certainly offers gorgeous vistas of all sides of Portugal.

There are many points along the route where you can start your Camino Portuguese, each offering many sightseeing joys

The Coastal Way vs The Central Way

The Portuguese Coastal Camino is the main alternative to the Portuguese Central Way—the second most popular Camino route. Both of the Portuguese Way trails converge in Redondela and, even though both routes lead to the shrine of Saint James, each has its own unique charm.

Here are a few considerations that can help you decide which route to take.

Do You Want to See the Seaside?

Both the Camino Portuguese Coastal and the Central Way route starts in Porto. However, many pilgrims decide to skip the first couple of miles and begin their journey somewhere more scenic.

Those who prefer the ocean usually spend the first day in Matosinhos. This section is 14 miles long. It runs along beachside boardwalks so it is pretty easy to follow. The Atlantic coastline is adorned with golden sandy beaches, so lovers of the seaside will certainly enjoy it.

After that, pilgrims can enjoy more magnificent sea views between Vila do Conde and Esposende. The middle stages of the route are dotted with a few short but gorgeous coastal stretches here and there.

This section of the route mainly passes through old farms, small villages, and lush forests. However, if you start missing the sounds of rushing waves, there are a few stages where you can take a detour.

Then, in Galicia, where the final stages and the last 100km begin, the route meets the ocean again and takes the pilgrims along a rugged coastline. Here, the pilgrims have a few days of hiking along beaches, and then it’s the countryside all the way.

If you are not too fond of the ocean breeze, the Central Way might be a better option. The classic Portuguese route runs through historical towns, villages, and farmland. Along the way, one can see many medieval and Roman buildings, bridges, and artefacts.

The section north from Ponte de Lima follows a part of an ancient Roman road. With mountain ranges in every direction, the scenery around Ponte de Lima is very attractive.

The Central Way may not offer coastal views, but it offers more traditional Camino symbols, such as ancient stone crosses, sculptures, chapels, and wayside shrines.

Are You Up for a Bigger Challenge?

Obviously, the Camino is one big challenge, but some routes are even more challenging than others. The Coastal Route is easier to power though since the terrain is mostly flat; you won’t see many inclines.

The Central Way includes a very steep descent into Redondela and a climb to the top of Labruja Mountain. The Coastal route is undoubtedly the better option for less experienced hikers.

How Much Time Do You Have?

The Coastal Route is approximately 160 miles long. It is about 33 miles longer than the Central Route. If you average about 20 miles a day, as most pilgrims do, it takes 13 days to complete the Coastal Way. The Central Way usually takes 12 walking days.

If you don’t have that much time, you can start at a later stage, or even skip a few stages. However, if you want to get the Compostela (a certificate of completion that is only granted to those who have made the pilgrimage), you need to walk the last 100 km (about 60 miles) on foot.

When Do You Plan to Walk the Camino?

Technically speaking, you can walk the Coastal Way all year round, but the weather can be pretty harsh. In coastal areas, rough seas and high winds can cause setbacks for pilgrims.

In terms of weather, April to June or September to October are the best times to walk the Portuguese Camino. During these months, there is less chance of rain.

In the summer months, July and August, the weather is quite hot in Portugal. But, thanks to ocean breezes, the air is more breathable on the coast than it is deeper inland. Moreover, you can go for a refreshing dip in the sea whenever you are near the beach.

However, holidaymakers may get in your way since Portuguese beaches are packed in the summer. If you decide to do your Camino in summer, it’s best to start each day early to beat the heat.

You may also like: Fatima, an iconic Portugese pilgrimage

How Sociable Are You?

The chance to meet pilgrims from all over the world is one of the best things about the Camino. May and September are the most popular months, so you can rest assured that you will come across many friendly pilgrims no matter what route you take.

If you want to meet plenty of people on the Camino, the Central Way may be a better choice. If you prefer solitude, walking the Coastal Way during quiet months may be the best option.

Which Historical Towns Do You Want to Visit?

The Coastal Route passes through quite a few beautiful cities and towns. Highlights on this trail include the charming coastal town of Baiona, Caminha in the North of the country, Viana do Castelo on the River Lima, and the likeable resort of Vila do Conde.

The highlights of the Central Way include the fortress town of Valença do Minho and the riverside town of Ponte de Lima. You will be passing through other interesting places once the routes merge, such as the picturesque Padrón, the spa town of Caldas de Reis, and Pontevedra.

The Portuguese Coastal Route is undoubtedly one of the more charming routes that lead to the Santiago de Compostela Cathedral. Due to its golden beaches, quaint towns, diverse landscapes, and hospitable locals, the Coastal Way is becoming more and more popular. If you are looking for an alternate route to the shrine of Saint James, the Portuguese Coastal Route is well worth considering.