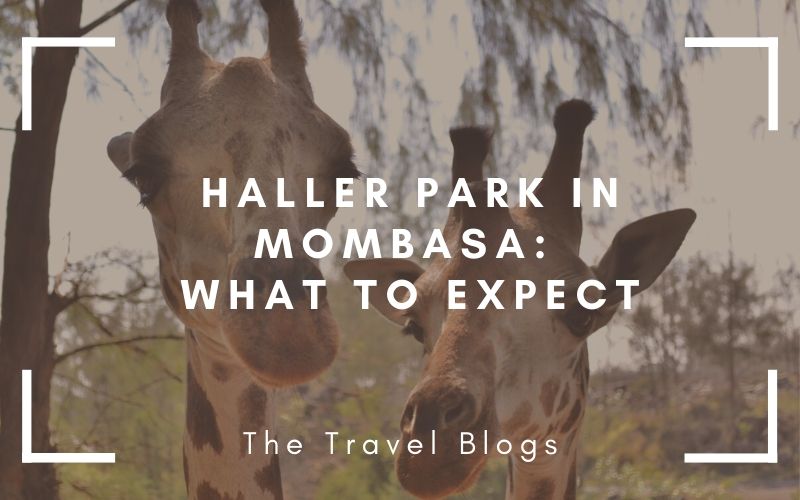 I was only in Mombasa for one day, with no real plans until a guide stopped me on the street asking what I wanted to do. I explained I was happy wandering, but he told me about this wildlife park where you can feed giraffes and get close to nature, so I thought I’d give it a go, and that’s how I discovered Haller Park in Mombasa.

This post is based on my experience of the park, taken from my African travel diary — available for a small price on Amazon if you enjoy it ?.

I’ll be sharing what you can expect from a visit to Haller Park, what you need to know before you go as well as some FAQs at the end. So read on and find out whether Haller Park is worth it.

A bit of Haller Park history

Haller Park, originally known as the Bamburi Nature Trail, sits on the site where Bamburi Cement Company used to mine coral limestone as a raw material for manufacturing cement. After years of quarrying, the area became an inhospitable arid wasteland, but in 1971, the cement company decided to rehabilitate the land.

It quickly became apparent that finding pioneer plants that could survive the limestone desert was no easy task. Everything they tried failed and no plants seemed able to establish themselves on the abused land.

However, later in the decade, Dr Rene Haller made some breakthroughs. One of the biggest was after he introduced red-legged millipedes to the site. The bacteria from these nourished the soil and things started to take root.

Slowly, more animals were introduced and the site grew to be what it is now, a thriving sanctuary covering 165 square kilometres of which the animal park is just a small part.

In 1999 the Bamburi Nature Trail was renamed Haller Park in honour of Dr Haller’s determination to transform the wasteland.

It always seems a bit sketchy agreeing to have a tour with a guy you bump into on the street, but having had a successful experience doing this just a few days earlier in Nairobi, I thought what the hell, let’s give it a go.

I had heard of Haller Park in Mombassa and tentatively thought about visiting, but I didn’t really have a way to get there and much time, so until I met Teddy, I had written it off as an idea.

I had already blown most of my budget and I was only 4 days into my African adventure so I was all set to say no, but we haggled a really good price of  $35, including transport and ticketed entry, so I agreed to visit with him.

If you don’t fancy trusting the man on the street, if you do decide to take a tour, you can book before you go.

We headed to the park by car and I will say the driving is amazing, how you can drive with all those minibuses and tuk-tuks around is beyond me.

While to some it may seem like terrible driving, I’ll never forget what a Vietnamese tour guide once said to me after I accused his country of having the craziest moped riders in the world.

“In Vietnam we have the best moped drivers in the world as if you are not, you die. Survival of the fittest”.

It struck me that driving in Africa follows a similar law.

Haller Park is home to a variety of wildlife, much of which is rescued, including hippos, giraffes, buffalos, and antelopes as well as smaller mammals, snakes and birds.

It’s not like other, wild Kenyan wildlife experiences, this is more comparable to a zoo that you can visit in any country, however, it is still very much a natural environment and not overly manicured.

The first part I discovered, after arriving, is the giraffes as they are actually outside of the main park. This means it’s possible to visit the giraffes and pay 50 Kenyan Shillings (around 50 cents) for a bag of food to feed them.

I thought it would be rude not to, so after 10 – 15 mins getting my hands and face licked by a giraffe, I entered the park and was greeted by Mzee, by a huge 140yr old tortoise.

The story of Owen and Mzee

Mzee is actually a little bit famous for his relationship with Owen, an orphaned hippo.

Following the 2004 Indian Ocean earthquake and tsunami, Owen was separated from his herd and was brought to the Haller Park rescue center. Then, to everyone’s amazement, the orphan hippo struck up an unlikely relationship with the old tortoise and they seemed to adopt each other.

For the following years they were inseparable, bathing, feeding, and playing together.

It wasn’t long before this story of an unlikely friendship gained worldwide media attention and they became possibly the most famous tortoise hippo duo in the world.

You can read more about their story in the kids’ book by Isabella Hatkoff, Owen & Mzee: The True Story of a Remarkable Friendship, a nice little read if you are heading to the region.

Never smile at a crocodile

The highlight of my visit to Haller Park was watching the crocodiles being fed.

I have seen many crocodiles in zoos, but they never do much, just kinda lay there being crocodiles. Here I got to see them feeding. They were huge and hungry. One of them must have been between 10-12 feet long and at least about two or three feet wide.

To feed them, park worker dangle a large chunk of meat over the water to encouraging them to jump. Kind of like fly fishing for crocs. Madness.

As you can imagine, it’s a popular thing to do at the park, so quite a crowd had gathered. Being the polite guy I try to be, I let a few ladies in front of me so they could get closer while I was trying to hold my camera above them to get a good picture.

While I was playing around with aperture settings or something like that there was this massive sound, like a hollow tree falling followed by a whole load of panicking, screaming women running away.

I am not going to lie, I was scared about what may have just happened.

It turns out it was just the sound of the croc’s jaws closing loudly and it scared the ladies so much they tried to stampede me!

Death by stampede of large, middle aged African ladies. When I thought of the many ways I could die on this trip that one was definitely not on the list!

But with them out the way, I was at least able to get a good picture. He snapped again and the noise was fantastic, so loud, as he grabbed the meat hanging above his head and off he went.

Don’t stand under the monkeys

The other part of the Haller Park that was interesting was while we were waiting for the hippos to be fed.

I could hear a rustling in the bushes all around – it was the sound of the monkeys waiting to steal the hippo food.

As fun as it was I had never thought about one thing . . . monkey toilet time!

Unfortunately for the lady next to me, nor had she.

All of a sudden a localised rain shower hit her right on the head as she screamed in disgust. Luckily we both moved away from the tree swiftly before the following hail storm arrived,

As much as I love monkeys, I forgot that when nature calls they are often up high and gravity will always win.

In total I spent about 3 hours in Haller Park, you won’t really need much more than that, and after a quick good-bye to Mzee, who had moved about 7 feet in two hours, I was on my way.

What is the Haller Park entrance fee?

What are the feeding times?

Currently, the Haller Park feeding times are:
Giraffes – 3pm
Hippos and buffaloes – 4pm
Crocodiles – 4.30pm
However, this is subject to change at their discretion.

What are the opening hours?

Haller Park is open from 8am – 5pm every weekday with half days on Saturdays and Closed on Sundays.

When is the best time to visit Haller Park?

I would strongly recommend visiting in the afternoon if you would like to see the feeding. The crocodile feeding time is certainly recommended. However, if you visit in the morning it will be cooler and quieter.

Where is Haller Park?

Haller Park is a nature park in Bamburi, Mombasa. If you are staying in the old town then you will definitely need a taxi or guide to take you there. Of course you can try the local matutus (crazy little buses) but I can’t tell you which one as the system seems completely mental.
If you are staying in one of the beach side resorts to the north of the old town, you will be much closer, but a taxi would still be advisable.

Fundamentally Haller Park may divide opinions, to some it will be a nature reserve, to others it is animal captivity. Despite reports I have since found, I could see no evidence of cruelty, but the animals are in captivity.

There are plenty of better places in Kenya to see wildlife. But if you are not taking a safari or able to spend days travelling to the Massai Mara, then Haller Park is a great little half-day visit. Kids will especially like getting up close and personal to the giraffes.

But . . . just remember, don’t stand under any monkeys!

Enjoy my book: How to Clean your Underwear in Africa

The blog above is based on a chapter of my Kindle book: How To Clean Your Underwear in Africa; Diary of an unskilled traveller.

It chronicles my journey through Africa and the hard lessons I learnt on the way.