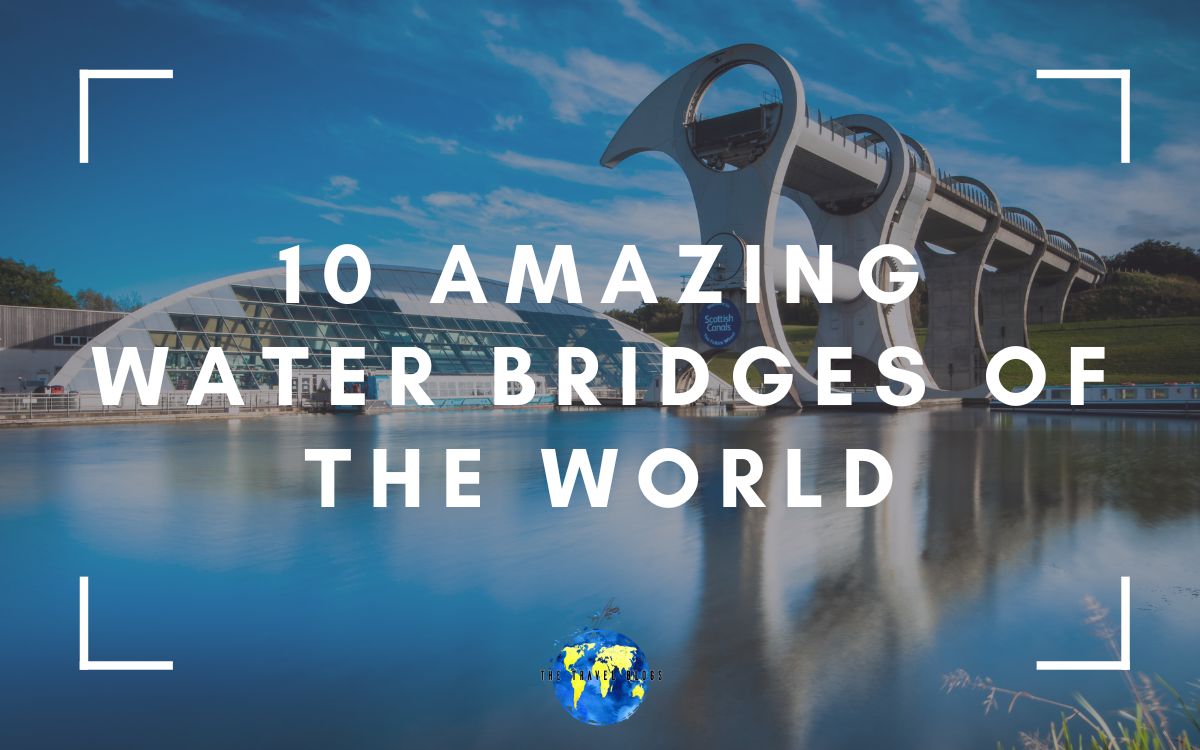 Water bridges are structures that carry navigable waterway canals over roads, railways or even other rivers. These incredible feats of engineering come in all shapes and sizes, and water bridges can be found all over the world.

While many ancient bridges still stand and are used to this day, modern engineering continues to develop and create exceptional examples of navigable aqueducts that are both essential for transport and aesthetically pleasing.

There are many impressive water bridges in the world; here are some of the best to keep an eye out for during your travels.

The Edstone Aqueduct, also known as the Bearley Aqueduct, is an engineering marvel of its time. At 475 feet (145 m) in length, it is the longest cast iron aqueduct in England. The aqueduct crosses a minor road, a stream, a field, a railway line, and the trackbed of a disused railway. It was completed in 1816, and its cast iron trough is formed of 35 separate sections. The trough is 2.7 metres (8.9 ft) wide and 1.5 metres (4.9 ft) deep.

It’s well worth taking the time to walk along the towpath and admire this remarkable piece of engineering as well as fantastic views of the surrounding countryside.

To get to the aqueduct, you can walk from Bearley railway station (about 15 mins), or if you are travelling by car, there is a small car park next to the southern end of the aqueduct on Salters Lane.

The Avon Aqueduct is another stunning feat of engineering of its time that carries the Union Canal over the River Avon near Linlithgow, Scotland. The bridge’s total length is 250 metres, and placed at 26 metres above sea level. The bridge has twelve spans, with the longest span measuring 15 metres. It is the longest and tallest water bridge in Scotland and the second longest in England.

The Union Canal is an excellent example of how engineers followed the land’s natural contours to create a canal that is easy to navigate. There are only locks at the points where it joins the Forth and Clyde Canal.

Limited free parking can be accessed via a narrow and steep hill if you visit by car.

You can also reach it by train. The Avoncliffe train station is just by the aqueduct, but it is a request stop, so you will have to inform the ticket master you would like to stop there.

It is a beautiful place to see and a nice side stop for anyone visiting Scotland.

The Pontcysyllte Aqueduct is a superb example of early 19th-century engineering. It was constructed in 1805 and is still in use today, making it the longest aqueduct and the highest navigable aqueduct in Britain.

The Pontcysyllte Aqueduct is a narrow water bridge that carries the Llangollen Canal over the valley of the River Dee. The bridge is 307 metres long and 126 feet high but can only accommodate one boat at a time.

The Pontcysyllte Aqueduct is a popular tourist destination. It is well worth a visit for anyone interested in history or engineering. The views from the bridge are simply breathtaking, and it’s a fantastic experience to walk across it.

It is a major tourist attraction and can be accessed from the A539. Three car parks are signposted off the A539, all within walking distance of the Aqueduct.

The nearest train stations to the Pontcysyllte Aqueduct are Chirk or Ruabon; you can catch a bus to the World Heritage Site.

The Veluwemeer water bridge is an amazing engineering and architectural feat connecting the Netherlands to Flevoland, creating the world’s largest artificial island. The bridge was officially opened in 2002 and is a remarkable example of how humans can shape and reshape their environment to suit their needs.

The water bridge is 25 metres long and 19 metres wide, with a depth of water of three metres at the crossing point. This allows vessels to pass safely over the motorway as cars pass underneath. There are also pedestrian crossings on both sides of the waterway, making it easy for people to get around.

The aqueduct’s construction took some 22,000 cubic metres of concrete plus steel sheet piling to bear the heavy weight of the water over the road and prevent water from seeping through. It’s a fantastic sight to see and well worth a visit if you’re ever in the area!

When talking about the most amazing water bridges of the World, we can’t ignore the Magdeburg Water Bridge, as it is the longest navigable aqueduct in the world.

Named after the nearby town of Magdeburg, the bridge opened in 2003 and spans the river Elbe and connects the Mittelland canal on the west side and Elbe-Havel Canal on the east side of the river, making it possible for large commercial boats to pass between the Rhineland and Berlin without having to go down into and then back up out of the Elbe itself.

Aside from its major water transport routes, the Magdeburg Water Bridge is also a popular tourist destination, offering beautiful views of the river Elbe. It even appeared in cinema, being featured in the motion picture Hanna.

If you’re lucky, you may even catch a glimpse of one of the massive commercial boats passing through the bridge. So if you’re looking for an interesting and unique sight to see while in Germany, be sure to add the Magdeburg Water Bridge to your list!

The Lune Aqueduct carries the Lancaster Canal over the River Lune on the east side of the city of Lancaster, Lancashire, England. Completed in 1797, the aqueduct is a traditional structure of that time, consisting of five stone arches supporting the stone trough. The total length of the aqueduct is 202.4 metres, at the height of 18.6 metres. Walkways have also been constructed on both sides of the water bridge for the pedestrians.

The Lune Aqueduct is often referred to as one of the “wonders of the waterways”, and it is a popular tourist attraction. Visitors can enjoy crossing the navigable canal on foot or cruising over it on a canal boat trip. The aqueduct is truly a sight to behold and is definitely worth visiting if you are in the area.

The Barton Road Swing Aqueduct is an iconic structure in Barton upon Irwell, Greater Manchester and a major feat of Victorian civil engineering. The swing action allows large vessels using the Manchester Ship Canal to pass through smaller craft, narrowboats and broad-beam barges to cross over the top. The bridge’s total length is 59.3 metres, and it’s the only swing aqueduct in the world.

The Barton Swing Aqueduct was designed by Sir Edward Leader Williams as a direct replacement for the earlier Barton Aqueduct, which connects the Bridgewater canal to the Manchester ship canal. However, the older structure could not accommodate the larger ships, so a new aqueduct was designed and opened in 1894 and has been in regular use ever since.

If you’re visiting Barton upon Irwell and the Manchester Ship Canal, check out the Barton Road Swing Aqueduct – it’s one of the area’s most iconic structures and a testament to Victorian engineering prowess!

The Pont du Sart Aqueduct is an impressive concrete structure that carries a navigable channel over a crossroads near the town of Houdeng-Goegnies in western Belgium. At 498 meters (1,600 ft) long and 46 meters (150 ft) wide, this aqueduct weighs 65,000 tons. It is supported by 28 concrete columns, three meters (10 ft) in diameter. If you’re ever in the area, be sure to check out this amazing feat of engineering!

When you visit Briare, you’ll find one of the most impressive water bridges in the world. This marvel of engineering was completed in 1896 and spans 662 metres as the bridge crosses the Loire River. But, of course, the best way to experience it is by boat, so you can enjoy the beauty of the water below and above as you cross.

What makes the aqueduct so special is not just its length but also its elegant design. It features two rows of antique lamp-posts that light up the bridge at night, making it a beautiful sight to behold. So whether you’re a history buff or simply appreciate beautiful architecture, visiting Briare’s aqueduct will surely be a memorable experience.

While not technically a bridge, I can’t miss this one off my list; it is stunning. The Falkirk Wheel is a rotating boat lift in central Scotland that connects the Forth and Clyde Canal with the Union Canal. It opened in 2002, with the construction taking 3 years, and reconnects the two canals for the first time since the 1930s. Planners decided early on to create a dramatic 21st-century landmark structure to reconnect the canals instead of simply recreating the historic lock flight.

The wheel raises boats by 24 metres (79 ft), making it the only rotating boat lift of its kind in the world and one of two working boat lifts in the United Kingdom. The Falkirk Wheel is an impressive sight and well worth a visit. A children’s Activity Zone, Mini Canal & Water Play Park, Water Activity Zone, Cycle Hire, Water Zorbing, Canoeing, Boat trips and more makes a great family day out.

These are just some of the most fantastic water bridge structures in the world. Each one is a unique work of engineering, and together they showcase the beauty and ingenuity of humanity. So next time you plan a trip, include one of these destinations on your list. You won’t be disappointed.