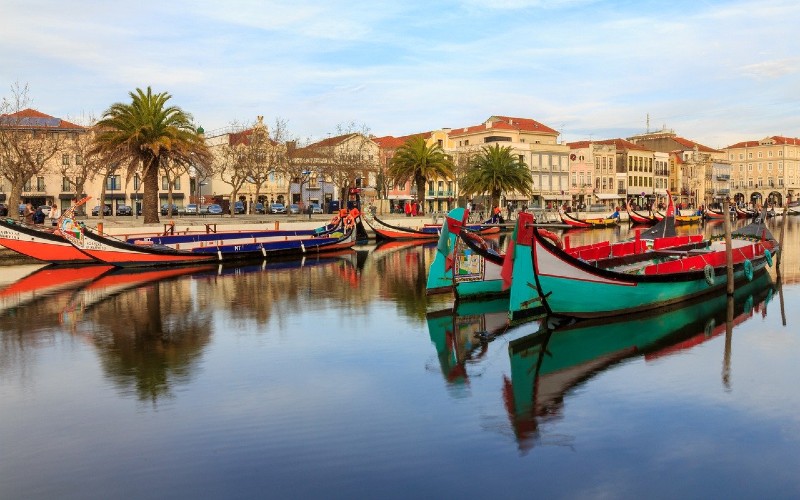 Aveiroooooo, our loud guide would call out regularly as we passed by other tourist-laden moliceiro boats cruising the canals of the town dubbed the Portuguese Venice. It added to the fun atmosphere of the informative tour and before long we were all at it.

A moliceiro boat ride through the Aveiro canals is one of the most popular things to do in Portugal and a must-do on any visit to Aveiro.

In this post, I’ll share with you my experience as well as a few tips about taking your own Aveiro boat tour.

Affiliate disclosure: The links to tours or accommodation in this post are affiliate links. This means if you purchase after following one of these links, I make a small commission at no cost to yourself. Think of it like a win-win.

A small city on the Portuguese coast, Aveiro lies about 75kms south of Porto and about 250kms north of Lisbon.

It’s closeness to Porto makes it an excellent option if you are looking for something to do as a day trip from the large city, especially if you tie in a couple of the other coastal towns in the area.

How to get to Aveiro

Driving in Portugal is quite simple, outside of city centres the roads are relatively quiet and the motorways are well maintained.

There is an extensive motorway toll system in Portugal, much of which is now automated. If you are hiring a car, be sure to ask about setting yourself up for automatic tolls. If you are driving yourself, not in a hire car, you will need to find a place that you can register your car and a credit or debit card.

As for parking, there is a large, centrally located car park that we found pretty easily just by following the signs. It costs around 0.85c per hour to park there.

There is also some street parking available, but when in a city I don’t know, I generally like to use official car parks. My friend managed to get her car towed in Porto not that long ago for parking where she shouldn’t, even though it seems fine. Not something that you want to deal with while on holiday!

For more information on how to set up to pay tolls, and to even calculate the tolls for your journey, there is this Portugal Tolls website which is bursting with helpful information.

If you are not planning on staying in Aveiro, one of the best ways to visit is via an organised tour. In fact, the town could easily be considered among the top things to do in Porto as it’s so close.

With a tour you will be sure that you see the best parts of the city, and most tours also include visits to the local, colourful villages of the coast such as Costa Nova and the Lighthouse of Praia da Barra. Here are a few examples of the tours that are available and the prices you can expect to pay.

The nearest useful airport is Porto, there are many airlines that have regular international flights. Lisbon would be the other airport you would likely use if you are arriving in Portugal, but as the driving distances above show, it’s quite a bit further away.

There are other airports, but they are all small regional ones.

It’s worth knowing there are no direct buses between Porto Airport and Aveiro. To continue onto Aveiro, you will either need to hire a car or to head into Porto city centre where you can get the train or bus onto Aveiro.

Aveiro has quite a striking, modern train station that is about 1km out of the city centre. While there are taxis available, as long as you’re not carrying too much luggage, it is quite an easy walk.

Trains run regularly from Porto Campanha train station and take around 1 hour to get there and cost around €7 for a round trip. You can book tickets on the official Portuguese Railways website.

If you do visit Aveiro by train, you’ll see one a popular tourist site almost instantly. The old train station is next to the new one. Completed in 1916, it is a wonderful building adorned in blue tiles that depict scenes from the local region. Examples include moliceiros, salt farms, traditional clothing and depictions of Aveiro’s canals.

Intercity buses connect Aveiro with Porto and Lisbon several times a day. The best site to use to find times and prices is the national operator Rede Expressos. Trips from Porto are around €8 and Lisbon around €15.

The Aveiro bus terminal is next to the train station, about 1km out from the city centre.

The Venice of Portugal

While the city itself is very pretty, the biggest draw is the colourful Aveiro gondolas that tour the canals. This network of waterways has led to Aveiro becoming known as the Portuguese Venice. While it is easy to see why, in reality, the comparison doesn’t really ring true.

If you are expecting a labyrinth of over a hundred interlinked canals, busy with people zooming about their business, you may be a little underwhelmed.

However, there is certainly plenty of water and an Aveiro canal tour is a great way to get to know the city and understand the tradition and history, it is one of the most popular things to do in Portugal.

The tradition of Aveiro moliceiros

Moliceiro boats are names after moliço, the type of seaweed that has been collected for generations from the shallow lagoons that separate Aveiro from the Atlantic.

Due to the poor growing quality of the local sandy soil, crop growth was difficult and the locals had found that moliço acted as an excellent fertilizer and a whole industry was born.

A traditional moliceiro will be around 15m long and 2m wide with very low sides and a flat bottom to maximise the amount of seaweed they can carry. They would have traditionally been sailed, but are run by engine these days. Only in Regattas and traditional shows are you likely you see a moliceiro boat being sailed the traditional way.

While the shape of the boats is very easy on the eye, the curved fronts and large rear ends, it is the artwork that really makes the moliceiro boats pop. Each boat is an individual piece of artwork with painted images on the bow and stern depicting traditional scenes around Aveiro. Sometimes it is a Saint but more often it is a celebrity or a funny take on everyday life.

These days it is easier for the region just to rely on buying in produce and crops from other towns so moliço was no longer as important as it once was. This combined with a changing generation looking for work away from the ocean meant that the traditional moliço business fell away.

Although the main business was always the seaweed, the Aveiro lagoons also formed vast saltpans that grew a large scale salt-making industry. They no longer use the traditional methods, but salt is still made there today and little bags Aveiro salt is a popular tourist souvenir to take home.

These days the moliceiro boats remain in the town as an iconic memory of the past and solely as a popular tourist attraction. Many companies operate moliceiro boat tours that last around 45 minutes. You can either book before you visit Aveiro or just as easily book on the day.

What to expect from a Moliceiro boat ride

Your moliceiro boat tour will take you along the main Aveiro canals passing under numerous bridges and past many of the beautiful Art Nouveau style buildings.

The most famous of the bridges is the Carcavelos Bridge over the São Roque canal that links the Fishermans Quarter to the salt pans. The current beautiful curved designs date back to 1953, it was built as a replacement of the original wooden bridge that had collapsed 11 years earlier, apparently under the strain of too many people piling on there to watch a boat race.

The bridge was primarily for the people who worked in the salt flats being the main crossing point for their working hours in Sal. But it also became known as for the bridge of lovers. The views of the sunset over the Aveiro salt flats have created a romantic spot enjoyed by many couples.

During the tour, you will be told stories by your guide of the Aveiro past and the traditional moliceiro ways of life. But they also tell you about how the city has changed through the years, embracing tourism while traditional ways of life slowly faded.

As I briefly touched upon earlier, tours can be booked online in advance or on the day. If you are tight on time I would certainly recommend booking in advance as you can be sure of your departure time and easily fit into your plans. Just be sure to check some of the reviews before you go as the tours do vary slightly from each different provider.

Where do I get the boat from?

There are many different operators along the canal, so just make sure you know where yours is based if you have booked your moliceiro tour in Aveiro before you go. Most of them are in the heart of the canal, along the road R. Joao Mandonca. However, there are a few other spots. One tour leaves from close to the fish market and they also leave from either side of the canal, so just check you know exactly where yours is located.

What’s the price of an Aveiro boat ride?

How long do the tours take?

On average, an Aveiro boat ride takes around 45 minutes

Do I need to speak Portuguese to understand the guides?

Check before you go what language your tour will be conducted in as they have them in multiple options. I ended up on a Spanish tour, which was OK as I had my translator (wife) with me. If I didn’t I would have probably been a bit annoyed.

Is a moliceiro boat safe?

Yes, they look a bit low to the water, but remember these have been used to ferry tonnes of seaweed at a time, a few tourists won’t pose a problem.

Do I need to worry about seasickness?

No. While the boat rides are on the water there is very little in the way of waves or wake to make you queezy.

Where to stay in Aveiro

If you want to stay for more than one day there are plenty of other things to see in the region. There are some wonderful beaches by Costa Nova, the Lighthouse of Praia da Barra and many other small villages.

When we visited, as the price of hotels in Aveiro was quite high, we stayed in a town called Vagos, about a 20-minute drive from Aveiro, where we also stumbled across the Museum of Play, a great stop of you have young kids.