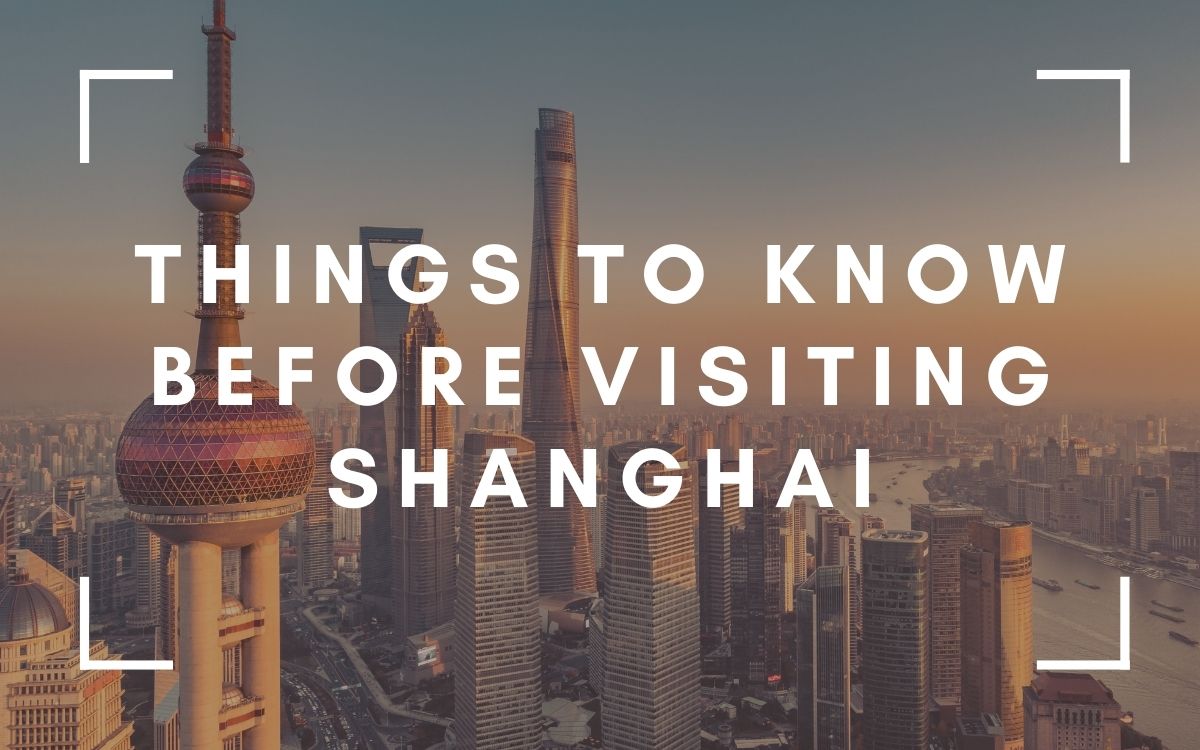 The culture shock you get when you visit Shanghai is like no other. You have to trust me on this: I have been to Asian metropolises such as Hanoi and Saigon before; I have visited Indonesia and India, and none of them felt as shockingly different (in a positive, interesting way) as Shanghai.

This city is an incredible mix of traditions and modernity, a bustling metropolis of the eastern world and one of the most high-tech cities on the planet.

Home to a staggering 24 million people, it’s the second-most populous city on the planet, and as you can probably imagine, incredibly different to the western world.

Despite the sprawling skyscrapers, futuristic towers, and many of the same brands and stores, Shanghai is poles apart from what you’d perhaps imagine and it can take some getting used to.

That’s not to say don’t visit Shanghai: far from it. This East China city is an extraordinary place that really must be seen to be believed. However, there are some things you really must know before you plan a trip there.

This post highlights 12 things you need to know before you touch down in Shanghai.

Things You Need To Know Before Going To Shanghai

1. It’s a city of contrasts

Shanghai is a city of contrasts, where you’ll find small, ancient buildings sandwiched between modern ones. For the most part, the city has a futuristic feel, with avant-guard buildings and a shiny skyline that looks like it’s just popped out of a science fiction movie. The Huangpu River is the perfect dinner spot: the view of the Pudong side of the city from the Bund at night is breathtaking.

If you visit Shanghai, make sure to go to Puxi. This is the historic part of the city, where locals live, and it’s where you’ll find old buildings, traditions, and lots of examples of the local culture and vibe.

One of the first things to consider when visiting China is sorting out a Visa. The only cities/principalities in which you don’t need a Visa when visiting China are Macau and Hong Kong. You will need a Visa for Shanghai. However, if you’re only planning to visit Shanghai for a short time (ie for a layover to go to another destination outside of China), then you may not need one.

If you plan to stay longer, you will need a Visa and I strongly advise you to give yourself plenty of time before you travel to apply for one.

You can apply for a Visa of up to 30 days, with six months required on your passport past the visa expiry date. The cost of them varies and it very much depends on the country you’re traveling from. If you are from the US you can get the 10 years visa with iVisa.com. If you are traveling with family or friends, you are also eligible for a Group eVisa. However, keep in mind that the maximum stay with a Group eVisa is 15 days.

When you visit Shanghai, make sure to explore the historical parts of the city

3. Communication with back home may be tough

If you plan to visit Shanghai, remember that China has a pretty stringent policy when it comes to internet censorship with many sites that westerners commonly use to communicate blocked by the government.

The likes of Facebook and Twitter are blocked regularly so if you’re wanting to connect with home via these mediums you may need to download a VPN.

There are a number of VPNs that can be used in China and what they do is allow you to connect to a server elsewhere in the world to bypass geoblocks and governmental censorship. Essentially masking your Chinese IP address, you’ll be able to use everything you usually would and speak to friends and family back home.

You can try a free VPN, but they can be difficult to use if you are not too tech-savvy. The best VPN for China is often considered to be ExpressVPN which many review sites and experts advise using, due to be it being specially designed to use in the country, but you can see more options in my article about the best VPN for travel.

Another way to talk with family and friends is WeChat (called Weixin in China). You can download it before you visit Shanghai and ask your friends back home to get it too. It’s what the locals use instead of WhatsApp.

No matter where you are in the world, knowing the local tipping culture is essential.  In Shanghai tipping is a relatively new phenomenon brought over by the west, but it’s still fairly common to see most not tipping at all.

Tipping is a lot more common in hotels, where it’s a little more expected, but in restaurants and taxis it’s really not that necessary. Not unless you’re feeling particularly generous anyway.

Shanghai is perhaps the Chinese city where you’re most likely to come across English speakers, but still, don’t expect it.

The language barrier can be a real problem in the city so, if you visit Shanghai, being prepared ahead of your arrival will be a real lifesaver.

Many people advise writing down stations and places you wish to visit ahead of leaving your hotel, so if you do get lost you can ask for help by pointing to a bit of paper or looking out for signs. However, with technology these days being so good, there are plenty of translation apps you can download these days.

Waygo is a good app for translating the written word in restaurants and even street signs, while of course Google Translate is always a good option, although you will likely also need a VPN to access it.

6. Food is good – but different

One thing you’ll quickly learn during your trip to Shanghai is that Chinese food in China is nothing like what you’re used to. Street food is a safe bet if you want something local. Much like you’d do in Hawkers Centers in Singapore, just look out for places that have a long line – they are bound to be the ones with the freshest food.

If you are eating at a restaurant, chances are that the menu will be in Chinese only – but most have photos of the food so you can make an informed decision when ordering. Also keep in mind that service won’t be up to the standards you may be used to: you’ll have to summon the waiters and it’s a common thing for all your courses to be brought out at the same time.

7. Tap water is not safe to drink

Much like in the rest of China, if you plan to visit Shanghai you should beware that tap water is not safe to drink. You can buy bottled water for cheap at restaurants and shops.

8. Getting around is easier than you can expect

For the most part, Shanghai is a fairly safe city – especially in the tourist areas. The transportation system is modern and the subway has signs in both English and Chinese, with announcements made in English as well – which surely helps a lot!

9. Cash is preferred, and only in local currency

Although most businesses – especially hotels and upscale restaurants – accept credit card payments, cash is usually preferred. Make sure to get some Yuan (or RMB, known locally as “quai” before you visit Shanghai and remember that only Chinese currency is accepted: you won’t be able to pay in Euro, Dollars or even Hong Kong Dollars.

This is probably the thing that grosses people out the most when they visit Shanghai or China in general: people there don’t use tissues to blow their nose or to cough. They just spit. Keep in mind that Chinese people find equally gross the fact that we blow our nose in a tissue!

Though airports and hotels have western-style toilets, most public places in Shanghai still make use of squat toilets. Make sure to carry a roll of toilet paper or a pack of tissues with you at all times, because only upscale restaurants will provide toilet paper in their toilets. Same thing with soap: it’s not available, and you’ll be better off carrying some hand sanitizer.

Even if you visit Shanghai for a short time, you can still get out of the city easily with the incredible bullet train that goes as fast as 300 km per hour. There are many interesting places to visit nearby. Hangzhou is a lovely place, home to the West Lake and packed with shops and nice tea houses. You can take a boat ride around the lake there.

Xitang is another village worth visiting, with nice souvenir shops, many lovely restaurants and the sight of the river with the many small boats giving it a peaceful look.

Have you ever visited Shanghai? What other important things to know would you add to this list?